Gaelic Games are sports played under the auspices of the Gaelic Athletic Association (GAA), the largest sporting organisation in Ireland. Gaelic Games are one of the few remaining strictly amateur sports in the world, with players, coaches, and managers prohibited from receiving any form of payment.

What is Gaelic Football?

Gaelic Football commonly referred to as football or Gaelic, is a form of football derived from traditional Irish ball games. It is played between two teams of 15 players on a rectangular grass pitch. (Games can be modified and played as 7, 9, 11, 13 a-side)

Players advance the football up the field with a combination of carrying, bouncing, kicking, hand-passing, and soloing (dropping the ball and then toe-kicking the ball upward into the hands). In the game, two types of scores are possible: points and goals. A point is awarded for kicking or hand-passing the ball over the crossbar, signalled by the umpire raising a white flag. A goal (3 points) is awarded for kicking the ball under the crossbar into the net, signalled by the umpire raising a green flag.

Positions in Gaelic football are similar to that in other football codes, and comprise one goalkeeper, six backs, two midfielders, and six forwards, with a variable number of substitutes.

Similarities between Gaelic Football and Australian Rules Football (AFL) have allowed the development of International Rules Football, a hybrid sport, and a series of Test matches has been held regularly since 1998.

The female version of the game is known as Women’s Gaelic Football and is very similar to the men's game with some minor rule changes especially relating to non-contact. The Women’s Ladies game is played in accordance with rules set out by the Ladies Gaelic Football Association in Ireland.

Hurling is an outdoor team game of ancient Gaelic and Irish origin. The game has prehistoric origins, has been played for over 3,000 years, and is considered to be the world's fastest field sport. One of Ireland's native Gaelic games, it shares a number of features with Gaelic football, such as the field and goals, number of players, and much terminology.

The objective of the game is for players to use a wooden stick (hurley) to hit a small ball (sliothar) between the opponents' goalposts either over the crossbar for one point, or under the crossbar into a net guarded by a goalkeeper for one goal, which is equivalent to three points.

The sliotar can be caught in the hand and carried for not more than four steps, struck in the air, or struck on the ground with the hurley. It can be kicked or slapped with an open hand (the hand pass) for short-range passing. A player who wants to carry the ball for more than four steps has to bounce or balance the sliotar on the end of the stick and the ball can only be handled twice while in his possession.

The female version of the game is known as Camogie and is played in accordance with rules set out by the Camogie Association in Ireland. 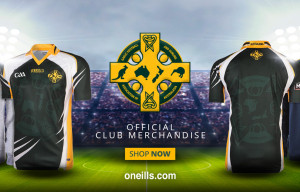